While increasingly many around the world are trapped in spiritual darkness, Jesus has all power and authority to set these captives free.

• Pray for God's light to reveal Satan's lies and his hold on Occultists' lives.

• Pray for strategically-placed believers to share God's love with Occultists.

• Pray for Occultists to experience the power of Him who raised Jesus from the dead.

It inspires fear in people’s lives, is joked about in movies, and seeks to understand the world from a spiritually deeper means than science. Occultism, often defined as “what must be hidden”, encompasses a variety of sects, beliefs, and practices. Though hidden from the world, God sees Occultists for who they are and longs for them to learn of His grace, forgiveness, and love. Followers may name Hermes Trismegistus, whose life is shrouded in mystery, as the one who unites all Occult teachings and practices. Some believed he was a god, others a demi-god; still others viewed him as a philosopher and strove to live by his teachings.  Aleister Crowley (1875-1947) also inspired and spread Occult teachings, believing he was the most powerful person in the world, a reincarnated magician. He devoted his life to studying the dark arts of black magic and the Occult and, after traveling the world to study Eastern religions and pagan rituals, wrote The Book of the Law which is still used by Occultists today. Occultism has influenced many areas of the world, especially Western nations. It is slowly beginning to seep into everyday activities, talk, and even religious rituals and worship. It holds close ties with Paganism and Animism, frequently blurring the lines between these three religions.

The many individual sects of Occultism practice spirituality in their own way. They include Freemasons, Witches, Psychics, Mediums, Satanists, Necromancers, and those practicing Voodoo. Though all hold to the beliefs of their particular sect, or of their own personal opinions, most Occultists feel that their practices and beliefs should remain hidden, and that outsiders should not know of their way of life. They live normal lives among society, but once in the safety of their homes, lodges, or covens, they open up to those who accept their spirituality. The Bible says, “Woe to those who deeply hide their plans from the LORD, and whose deeds are done in a dark place” (Is 29:15). It also says, “Everyone who does evil hates the light, and will not come into the light for fear that their deeds will be exposed” (Jn 3:20). Many followers of the Occult believe in communication with spirits, especially to obtain power and wealth. While some limit their spirit contact to people who have already passed on, others consort with demons. The Bible says, “Do not turn to mediums or seek out spiritists, for you will be defiled by them. I am the Lord your God” (Lev 19:31). The Occult is also linked together with Paganism and Animism by enslaving its followers in fear and uncertainty. Occultists search for ways to appease spirits or gain power in an attempt to protect themselves from the spirit world. Both Paganism and the Occult are modern, westernized versions of ancient Animism. The Bible says, “You deserted the Rock who fathered you; you forgot the God who gave you birth” (Deut 32:18).

Though its practices are becoming more prevalent in Western society, statistical data on the Occult is difficult to obtain, mainly because its adherents believe it should remain hidden from those who do not follow it. Though there are no known missionaries working among them, Occultists are still turning to Christ. Many of them live in constant fear of what may happen to them if they reject the spiritual power they’ve worked so long to obtain. The Bible says, “for He who is in you is greater than he who is in the world” (1Jn 4:4) Chains of bondage begin to fall away once Occultists have acknowledged that Christ has paid for every sin and accept His gift of salvation. Though the enemy’s hold is strong, Christ’s is stronger, and He came to set captives free! Many former Occultists praise God for being their Deliverer, their Rock, their Peace, and their Savior.

Little children, you are from God and have overcome them, for he who is in you is greater than he who is in the world.

“Do not turn to mediums or necromancers; do not seek them out, and so make yourselves unclean by them: I am the Lord your God.

“If a person turns to mediums and necromancers, whoring after them, I will set my face against that person and will cut him off from among his people.

Holy Book/Text: The Book of the Law

Who They Worship: pantheon of ancient deities/spirits 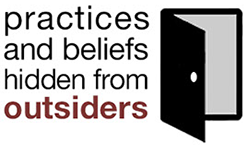