While millions of God's chosen people deny Jesus as Messiah, God remains faithful in His pursuit of His "treasured possession."

• Pray for healing from past wounds inflicted by Christians.

• Pray for courage to embrace the Gospel message despite the social consequences.

• Pray for Jews to understand that they can accept Jesus without denying their Jewish identity.

The Jews are “a people holy to the LORD your God… a people for his treasured possession, out of all the peoples… of the earth” (Deut 7:6). God’s love for the Jewish people is continually affirmed in both the Old and New Testaments. Judaism traces its heritage to God’s promises to Abraham (ca. 2000-1500 BC) and his descendants that “I will make of you a great nation, and I will bless you,” (Gen. 12:2) and “I... will be your God, and you shall be my people” (Lev. 26:12). The Old Testament outlines the struggles of the Jewish people to obediently follow God and to obtain and keep the Promised Land. It also describes a history of persecution that has persisted through time. Judaism is the original of the Abrahamic religions, providing the basis for Christianity and, to a certain extent, Islam. Judaism is usually ranked the sixth-largest world religion with approximately 14 million followers, less than 0.2% of the world population. Most are concentrated in Israel and the United States.

Emerging from a world entrenched in polytheism and human-behaving gods, Judaism was the first religion to officially recognize this timeless truth: there is only one God, and He is eternally good, just, and fair. The God of the Jews is creator, holy, righteous, all-present, all-powerful, all-knowing, merciful, loving, unique, and the only one worthy of man’s worship. Jews believe humans were made in God’s likeness with a dual nature, one that is heavenly and one that is earthly. Though humans can choose which nature to follow, God will hold them accountable for their actions. As part of the covenantal relationship with God that sets Jews apart as God’s chosen people, Jews are to obey God’s laws and to be pillars of holiness and morality because of everything God has done for them and continues to do. Jews look forward to the Messianic age, when Messiah will reign as King over all the earth and they will dwell peacefully and securely in the Promised Land. This will be a time of peace and prosperity across all creation accompanied by the resurrection of the dead who had lived righteously. Jews are the beloved brethren of Christians, loving and worshiping the same one true God, and Judaism and Christianity are both firmly based in the same Old Testament scriptures. The divergence comes over the one called Messiah. Judaism rejects Jesus as the Messiah, asserting that Jesus did not fulfill the Old Testament prophecies as the Jews expected. Jesus declared “Do not think that I have come to abolish the Law or the Prophets... but to fulfill them” (Matt 5:17). When interrogating Jesus, the high priest demanded “‘Tell us if You are the Christ [Messiah], the Son of God!’ Jesus said to him, ‘It is as you said’” (Matt 26:63-64).

More Jews believe in Jesus today than in the past 2000 years combined, and while Judaism continues to grow at 0.91%, thousands of Jews are finding true peace in Jesus Christ. Despite a turbulent history with the Christian Church that has left many Jews resistant to Christian evangelism, God is healing wounds of the past and creating a new relationship of respect and communication between Christians and Jews. Thus avenues are opening that better reflect Jesus’ love for the Jews and that share the Gospel more lovingly and effectively. God is also moving within the Jewish community. Followers of Judaism around the world are proclaiming Jesus as Messiah and Lord.  Such Jews, many of whom regard themselves as Messianic Jews, follow Jesus Christ within their Jewish identity and culture but do not consider themselves to be converted to Christianity. An estimated 20,000 Messianic Jews live in Israel, a dramatic increase from under 10,000 in the 1990s. Globally, there are roughly 1.7 million Messianic Jews another huge change from only 40,000 in the 1990s. God is faithfully guiding His beloved chosen people to the Truth of Jesus, the Messiah that He promised to them long ago.

and Israel, for you are my servant;

I formed you; you are my servant;

O Israel, you will not be forgotten by me.

I have blotted out your transgressions like a cloud

return to me, for I have redeemed you."

I will give them a heart to know that I am the Lord, and they shall be my people and I will be their God, for they shall return to me with their whole heart.

Long ago, at many times and in many ways, God spoke to our fathers by the prophets, but in these last days he has spoken to us by his Son, whom he appointed the heir of all things, through whom also he created the world. 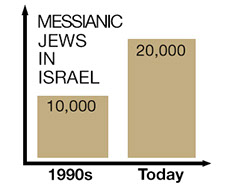 Who They Worship: God of Abraham, Isaac, and