While increasing millions are turning to Muhammad instead of Christ, Jesus continues to lovingly reveal himself to seeking hearts.

• Pray for Muslims to encounter Jesus Christ through visions, dreams, and faithful witnesses.

• Pray for courage and perseverance to follow Jesus when it means loss of family, future, and even life.

• Pray for all efforts to silence the Gospel to instead propel it across the Muslim world.

Many generically view Muslims as violent and hateful, causing contempt and mistreatment towards Muslims. But that animosity towards a beautiful people created in the image of God is heartbreaking to the Creator, who is “filled with unfailing love” (Ps. 145:8b) and “showers compassion on all His creation” (Ps. 145:9b). Islam shares Abrahamic roots with Judaism and Christianity. It teaches that Muhammad was a prophet who received Allah’s final revelations in the early 7th century. Muslims see Jews and Christians as “People of the Book”, those with sacred scriptures that have been corrupted. Only Muslims, they believe, have the uncorrupted truth. After Muhammad took control of Mecca in 630 AD, Islam spread in all directions. Today it is the world’s second largest religion with roughly 1.8 billion followers, predominantly in North Africa, the Middle East, and South Asia.

The very translation of the word ‘Islam’-- submission to God-- summarizes its essence. Humans, though not inherently sinful, are susceptible to temptation. To temper this vulnerability, Muslims submit to Allah’s will. Allah is revered as creator, supreme, all-powerful, all-knowing, and deserving of devotion. Muslims hope, but are not assured, to attain paradise by believing in Allah’s revelations to the prophets and living them. These are manifested in good deeds, moral behavior, and the Five Pillars of Faith, requirements for Muslims that include a declaration of faith, prayer, charity, fasting, and the Hajj, or one-time pilgrimage to Mecca. Allah weighs Muslims’ good and evil deeds, and a perpetual paradise of peace with materialistic and fleshly pleasure await Muslims whose good deeds outweigh evil. Hell awaits those whose evil deeds prevail. Jesus said “this is the way to have eternal life - to know you, the only true God, and Jesus Christ, the one you sent” (Jn 17:3), and that “I am the way, the truth and the life. No one can come to the Father except through me” (Jn 14:6). Muslims believe Jesus was a human teacher and prophet, who foretold Muhammad’s coming. Jesus said “I am” (Mk 14:62), declaring himself the Son of God, who did not “come to abolish the Law or the Prophets… but to fulfill them” (Matt 5:17).

Islam is growing faster in percentage than any other major world religion, even in traditionally Christian lands like Europe, nearly doubling the growth rate of Christianity. Outreach to Muslims receives some of the lowest support from Christian mission resources. And yet, something incredible is happening within the Muslim world: Muslims’ souls are being awakened to the truth of Jesus through dreams and visions. Muslims everywhere are confessing Jesus Christ as Lord and Savior in greater numbers since 2000 -- even in mass movements -- than in the 1300 years prior. God is using every means to bring the Truth of Jesus to His beloved children and to ignite the innate desire to know their Creator. In 1980, there was only one Christian missionary for every one million Muslims; today there is one for every 100,000. Many more missionaries are needed; God is preparing Muslim souls to receive the Truth of Jesus. The harvest is ripe.

And this is the testimony, that God gave us eternal life, and this life is in his Son. Whoever has the Son has life; whoever does not have the Son of God does not have life.

And the Word became flesh and dwelt among us, and we have seen his glory, glory as of the only Son from the Father, full of grace and truth. 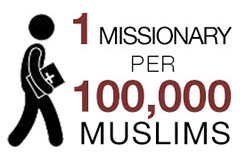 Who They Worship: Allah 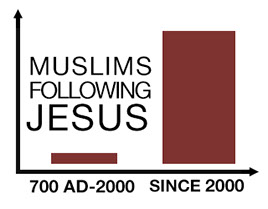