While millions seek world peace through uniting religions, Jesus Christ alone - the Prince of Peace - can establish the peace that passes understanding.

• Pray for members of the Universal House of Justice to recognize Jesus as the true and final Christ.

• Pray for members of national and local assemblies to question their faith and search for Truth.

• Pray for Baha’is to find the peace they seek in God’s everlasting kingdom.

While Baha’is are not well known by many around the world, God knows them perfectly as beautiful people for whom His love is never-ending and never-changing. The Baha’i faith was born out of Islam in 1844 when the Báb, a supposed messenger of god, said a man was coming who would be the next prophet from god. After Muslims executed the Báb for teaching against their beliefs, Bahá'u'lláh - one of the Báb’s followers - proclaimed he was the announced prophet. After Bahá'u'lláh’s death, Abdu'l-Bahá, his son, began spreading the religion around the world. Today a committee of people, the Universal House of Justice, is elected to lead the religion. It is the second most geographically widespread religion in the world after Christianity. With 7.5 million followers, primarily in India and Africa, this is the seventh largest religion in the world.

Baha'is believe there is one god who created the earth and everything in it. They believe every religion worships that same god, called by different names. Cultural differences have led people to interpret god differently, they say, leading to many different religions. Baha'is believe god is omnipotent, without sin, and all knowing. He cannot be incarnated into human form. But the Bible says, “And the Word became flesh and dwelt among us, and we have seen his glory, glory as of the only Son from the Father, full of grace and truth” (John 1:14). They also believe that humanity cannot know anything about god because we can’t understand him. All we can know is that He exists. But the Bible says, “The LORD has made his salvation known and revealed his righteousness to the nations” (Ps. 98:2). Baha’is believe that men such as Abraham, Moses, Zoroaster, the Buddah, Mohammad, and even Jesus were prophets sent from god. But Jesus said, “I and My Father are one” (John 10:30). The essence of the Baha’i faith is that all people should be unified and love each other. They encourage people of many different faiths to join the Baha’i faith without the renunciation of their previous faith. A person must only recognize Bahá'u'lláh as the latest messenger from god. But the Bible says, “Beloved, do not believe every spirit, but test the spirits to see whether they are from God, for many false prophets have gone out into the world” (1 John 4:1). Baha’is believe everyone has an immortal soul, which will freely roam the spirit world after death. There is no literal heaven or hell. After death, it is only a journey towards or away from god. Followers of the Baha’i faith must develop certain virtues during this life so they will be able to move forward quicker in the next. Matthew 25:46 says, “And these will go away into eternal punishment, but the righteous into eternal life.”

People within the Baha’i faith are lost and searching for something that can only be found in the presence of the one true God. As one of the world’s fastest growing religions, more and more people are losing their way from God and trying to find refuge in this lost religion. But there is light within the darkness. Many Baha’is are seeing the problems within their faith and seeking more. God is speaking to these people in amazing ways, drawing them to their Savior Jesus - the only way, truth, and life (John 14:6).

Beloved, do not believe every spirit, but test the spirits to see whether they are from God, for many false prophets have gone out into the world.

And the Word became flesh and dwelt among us, and we have seen his glory, glory as of the only Son from the Father, full of grace and truth. 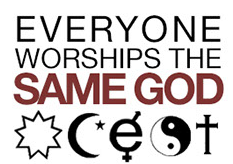