While increasing numbers of people deny the existence of their creator, He relentlessly pursues them with revelations of Himself.

• Pray for prejudices, hurts, misrepresentations of God, and intellectual hurdles to be overcome by the Truth

To many Christians, atheists are arrogant thinkers who have lost their way from God and stubbornly reject Him. But though they deny the very existence of God, He knows them completely—and loves them unconditionally. For thousands of years belief in God has always been challenged by doubters. From Greek philosophy came the works of Diagoras, considered the “first atheist.” His attempts to explain the world were purely materialistic, without reference to the spiritual or mystical. The universe, many came to agree, was governed by laws of chance, not a divine being. Atheism is now considered the third-largest “religion” in the world after Christianity and Islam, with 13 percent of the world’s population identifying themselves as strict nonbelievers. Disbelief in God is most prevalent in southeastern Asia and continues to grow across Europe, a region once teeming with deep faith. The ability to forge one’s own path, not relying on the laws of religion, as well as religious intolerance and persecution, have made atheism increasing popular.

While many throughout history have been indifferent toward faith, an atheist truly believes there is no God. The most fervent adherents today form New Atheism, which consists of scientists and writers who state that religion “should not simply be tolerated but should be countered, criticized, and exposed by rational argument wherever its influence arises." To an atheist, if there is not clear evidence of God’s existence, there is no God. The Bible says, “For since the creation of the world God’s invisible qualities—his eternal power and divine nature—have been clearly seen, being understood from what has been made, so that people are without excuse” (Rom 1:20). The world is material to an atheist: matter created the universe, not a divine creator. To nihilists, for example, this means there is no moral code and that people’s lives are meaningless. To secular humanists, the absence of God makes human beings responsible for making and following their own moral code.  According to an atheist, employing reason, tolerance, and good will lead humanity in creating a better world. But the Bible says otherwise: “all have sinned and fall short of the glory of God” (Rom 3:23). It also says “there is none righteous, no, not one” (Rom 3:10b). As the second Humanist Manifesto states, “No deity will save us; we must save ourselves.” The Bible says: “For by grace you have been saved through faith; and that not of yourselves, it is the gift of God; not as a result of works, so that no one may boast” (Eph 2:8-9). Atheists believe that the individual must decide what is right and wrong. The Bible says, “We love because He first loved us” (1 Jn 4:19).

Atheism has grown rapidly in the last century. It is strongest in nations such as China, Japan, the Czech Republic, France, and many other places once marked by burgeoning Christian faith but which have since fallen cold. Most of these places have access to the Gospel. It is frequently through nonbelievers seeking to discredit Christianity that God is moving. In setting out to disprove Christianity and affirm their own secularism, notable men like Lee Strobel, Josh McDowell, and others have determined that the evidence overwhelmingly points toward God and not away from Him. C.S. Lewis, one of the most respected Christian apologists of all time, was an avowed atheist who experienced “…the steady, unrelenting approach of Him whom I so earnestly desired not to meet. That which I greatly feared had at last come upon me…I gave in, and admitted that God was God…”  Modern science, long thought to be proof against religion, is increasingly revealing new discoveries that point toward a creator. This led Francis Collins, the leader in mapping the human genome, to proclaim himself a believer without sacrificing his scientific observations. It is through God, not man, that the answer to one’s salvation is found. Anyone who opens himself to Christ will inherit the love, mercy, and compassion of an all-knowing God. This comes through loving Him. Because He first loved us.

"The fool says in his heart, “There is no God.”

They are corrupt, they do abominable deeds,

there is none who does good."

They are darkened in their understanding, alienated from the life of God because of the ignorance that is in them, due to their hardness of heart.

For what can be known about God is plain to them, because God has shown it to them. For his invisible attributes, namely, his eternal power and divine nature, have been clearly perceived, ever since the creation of the world, in the things that have been made. So they are without excuse. 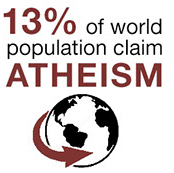 Place of Worship: none 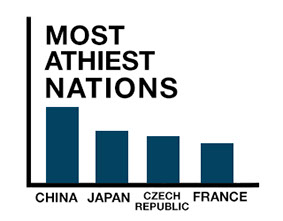