While millions across the globe live in fear of the spirit world, Jesus holds all power and authority and His love casts out all fear.

• Pray for fear to be shattered and replaced with the peace and freedom of Christ.

• Pray for more missionaries to bring Jesus' name to unreached and forgotten tribes.

• Pray for a knowledge of God's grace to overtake the uncertainty of works and appeasement. 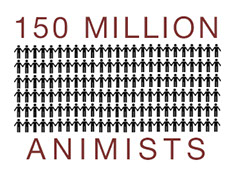 Who They Worship: ancestors, spirits, the Earth